Titles: WBO heavyweight
“I was holidaying in Cape Town when I got a call for Sanders to fight Klitschko. He was a perfect opponent, having credibility but with no chance of defeating Klitschko.
“Corrie was 37 years old at the time, he had only fought once in the last 12 months, and this was to be his last swansong. The purse was abysmal, but just to ensure that he could retire gracefully; Golden Gloves supplemented his purse – that’s how bad it was.
“Sanders ability as a fighter was greatly underestimated and his win was no fluke. For a heavyweight, his handspeed, footwork and power were phenomenal, but he lacked dedication and, in truth, he hated boxing. His passion was golf and his ambition was to play on the senior circuit when he turned 50.
“He was noticeably smaller than Klitschko, but Corrie knew what he had to do. He had explored all the flaws in Klitschko.
“It is interesting that Golden Gloves has been responsible for two of the greatest upsets in heavyweight boxing history; Rahman and Corrie.”
Result: Sanders TKO 2

Wade Groth – the new animal on the boxing block 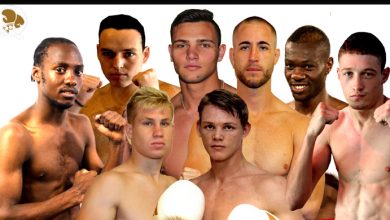