Any concerns that the holiday break might have taken the edge off some of SA’s top boxers was put to bed in emphatic style yesterday as Kevin Lerena, Thulani Mbenge and DeeJay Kriel appeared at the open day ahead of “Palace Pandemonium” at Emperors Palace on March 3.

All three looked lean and sharp with both Lerena and Mbenge demonstrating their ring smarts working the mitts with their trainers at the Smith’s gym in northern Joburg.

“Tough fights bring out the best in me,” said Lerena, who is never less than confident. “Kucher is probably the best I’ll have fought. I have a top game plan. I really want to win by knockout . . . that will get me noticed even more.”

Mbenge conceded that Cruz was a step up, but isn’t daunted by the Mexican who, like him, is young, hungry and packs a punch.

“I’m not scared, I’m obviously going to go to 13-0,” he said with his customary self-assurance.

Kriel never worked out yesterday, but he spoke effusively of his rematch with Magusha, who now reigns as the SA minimumweight champion (Kriel is the WBC International belt holder).

“For once, I’m not nervous at all. But I must win, in better style than before.”

Azinga out – ‘War Child’ steps into the breach 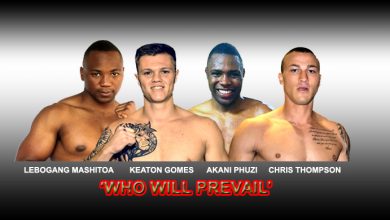 “Who will Prevail?” Cruiserweight shootout in the works.