There will be a classy touch at ringside on March 3 when the august Ring magazine is represented at the “Palace Pandemonium” tournament.

This is because prominent journalist Anson Wainwright, a correspondent for the “Bible of Boxing” and member of the WBC’s ratings committee, will be in town to run his eye over top young boxers Thulani Mbenge and DeeJay Kriel.

Having heard much about the pair, the globetrotting journalist is keen to take a first-hand look.

Mbenge will be fighting Diego Cruz of Mexico and Kriel will be up against Xolisa Magushu.

“This is yet another incentive, for Mbenge especially,” said Berman, explaining that this would be the start of his march up the WBC ladder. He added that Kriel would also have a chance to strut his stuff, cementing his place in the WBC ratings, plus Kevin Lerena, who is matched tough against Dmytro Kucher in defence of his IBO cruiserweight belt.

Tickets are selling well and the full-house signs are expected to go up on the first major local tournament of the year at Emperors Palace. 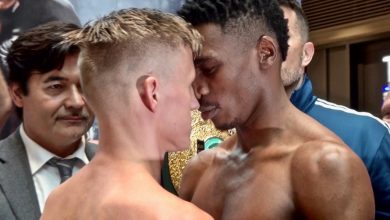 Mbenge Vs Formella Head To Head

‘Two Guns’ breaks down his performance