Thulani “Tulz” Mbenge has always had the look of something special.

On Sunday, at a packed Emperors Palace, he claimed the first professional title of his career with a crushing ninth-round stoppage of SA welterweight champion Shaun Ness.

Mbenge had to work harder than he had done in his previous nine fights, for Ness was rugged and proud, but finally his clinical, harder punching won the day as he overwhelmed the title-holder.

Mbenge had to contend with a deep cut underneath his right eye and Ness’ awkward southpaw style, but he broke him down through the rounds and came on strongly at the finish.

Ness had been down in the first, from a cracking right hand, and again in the third, when he went down heavily. It looked like he was about to go, but trainer Colin Nathan fired him up in the corner and that seemed to spur him on.

Ness had his moments, but Mbenge’s sharper punching, chiefly to the body, worked a treat and Ness was on borrowed time when a shot downstairs sent him to the canvas in the ninth. He appeared fine to continue, but Nathan smartly threw in the towel.

There was some criticism of the decision to surrender, but Ness had been worked over, put down three times and didn’t have the tools to engineer a win. If Nathan erred, it was on the side of caution and that’s no bad thing in a sport like boxing where timing is everything.

The fight for the Gauteng junior-lightweight title was a dream come true for Golden Gloves given that the new champion Lucky Monyebane was a product of their investment a number of years ago in the North West.

Monyebane delivered on his rich promise as he dominated veteran Ashley Dlamini to stop him in the ninth round. It was the first time he had ever gone beyond four rounds and if the fight seemed a necessary risk, Monyebane justified the confidence of his backers with an assured win.

With a crowd of imbongis bussed in from his home region, Monyebane had tremendous support as he went to work on Dlamini.

The southpaw was super-fast from the off and before long Dlamini was reduced to a plodding opponent who couldn’t cope with Monyebane’s speed or movement.

Dlamini was caught hard and often, but he fought gamely. The end came in the ninth when he was belted with a terrific left that left him in lala-land and forced a TKO stoppage and, naturally enough, an eruption among the big crowd.

After a measured start, Lerena began unloading from the third round, but there was little he could do to dislodge the visitor. Ramirez barrelled in and flailed away at Lerena, but the South African’s movement kept him out of harm’s way and he was content to get the rounds under his belt rather than seek a spectacular one-punch show-stopper.

The Mexican was incredibly tough with Lerena’s punches making no discernible impression. It would have been encouraging to see Lerena let his hands go more often, not least because Ramirez was ill-equipped to cope with his speed, but he nonetheless had few problems completing this assignment.

It’s win number 18 for Lerena and another lesson learned on his path to the top. If will get far tougher from here on.

In possibly the finest performance of his career, strawweight DeeJay Kriel overcame the determined challenge of Xolisa Magusha to win on points over eight rounds.

The East Londoner pressed the action early, but two things defined Kriel’s performance: his tremendous work inside and his defence. He had no problem dealing with Magusha’s southpaw style and he boxed with a confidence seldom before seen.

Kriel raised his game down the stretch and Magusha, while relentless, didn’t have the all-round game of Kriel to threaten a win.

In earlier fight action, pro debutantes JayJay Sonjica (featherweight) and Ricky Tshabalala (super-middleweight) both looked accomplished in winning their debuts in the second round.

Light-heavyweight prospect Rowan Campbell was unexpectedly put over with a left hand in the second round of his bout with Gerson Sinyo, but he roared back in the third when Sinyo was counted out on his feet.

And Youth Comonwealth medalist Jabulani Makhense, trained by Sebastian Rothmann, had too much firepower for Sebohelo Nzemandi, who was decked three times in the first of their junior-welterweight contest. 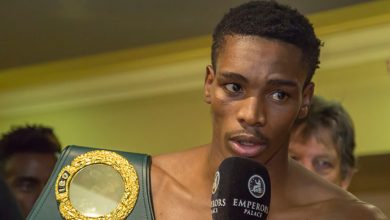 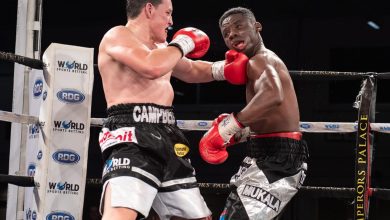 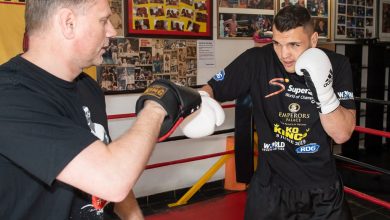