Cassius “The Hitman” Baloyi rebounded from his first defeat the previous year at the hands of Philip Ndou by stopping Tiger Ari in six rounds for the IBO junior lightweight title. Countryman, Mbulelo Botile, a former IBF bantamweight world champion, had just lost his IBF featherweight world title to Frankie Toledo in the US, the same Toledo that Baloyi had beaten years earlier. It was a crossroads battle, with the table set for another local war at Carnival City.

Botile showed his class from the get-go, applying steady pressure to a back tracking Baloyi, using his solid jab, while banging in accurate shots to the head and body. Baloyi seemed flustered at times and could not get his punches flowing.

In the sixth round Baloyi decided to change tactics, planted his feet, and stood his ground in the center of the ring. Botile was still outpunching him but Baloyi landed a hard right that seemed to stun the Eastern Cape fighter.

Botile took back the control in the eighth round, lading a cracking left hook which sparked Baloyi to retaliate with a salvo of blows. The wily Botile ducked underneath the shots but Baloyi was not about to give up and exploded at the end of the round, landing several good rights.

The technical boxing match suddenly turned into a fight in the ninth with both fighters slugging it out to the delight of the crowd.

Abandoning his usual calculated boxing style to turn fighter turned out to be a gamble worth taking for Baloyi when he finally turned things around in the eleventh. He went after Botile, backing him into a corner after hurting him with a left hook. Baloyi opened fire, nailing him with two consecutive rights. Botile tried to escape by sliding sideways along the ropes but Baloyi followed him, raining in punches. Botile managed to block some of them but a hard uppercut snapped his head back. Botile suddenly came apart at the seams, the follow up punches making him sag to the canvass. He got up, but Baloyi kept throwing. A scorching right knocked Botile’s head back, forcing the referee to stop the fight as Botile turned his back on Baloyi.

Mbulelo Botile showed the skills that made him a world champion on two occasions, but he had reached the end of the road. He would have one more fight in 2005, losing to Anthony Tshehla before calling it a day.

Cassius Baloyi survived another local war but this time he came out as the victor and there was still much more to follow. He made three more defenses of his belt, which included two wins over former IBF junior featherweight world champion, Lehlohonolo Ledwaba, before dipping his toe in the lightweight pool, taking on future IBF world welterweight champion, Isaac Hlatshwayo, for the vacant IBO lightweight title in 2005. It was another great fight but Baloyi lost the decision.

The best was yet to come. He had won lesser regarded WBU and IBO world titles at three weights but a major world title in the big four sanctioning bodies still eluded him. That all changed in 2006 in his very next fight when he journeyed to the US. Dropping back down to junior lightweight, he stopped former WBC, WBO and three-time IBF featherweight world champion, Manuel Medina, in eleven rounds to capture the vacant IBF world junior lightweight title.

He lost the title in his first defense against Australian underdog, Gairy St Clair, getting outworked over twelve rounds. He avenged his defeat to St Clair, who had by then lost the title to another South African, Malcolm Klassen and then regained his IBF world title, beating yet another South African, Mzonke Fana, on points in 2008. After one defense he lost the title to Klassen, getting stopped in seven rounds, the only time he ever failed to answer the final bell. He would try one more time to regain the IBF world title, losing to Mzonke Fana for the vacant belt.

He fought three more times, losing on points to three future and former world champions, Argenis Mendez, Paulus Moses and again to Malcolm Klassen before retiring in 2012 with a record of 37-8-1.

Cassius Baloyi, along with Mzonke Fana and Malcolm Klassen, was an integral part of a classic South African rivalry around the IBF junior lightweight world title, as well as a two-time IBF world champion, along with having held two WBU titles and an IBO world belt. He fought classic wars with Philip Ndou, Botile and Hlatshwayo and recorded wins over such notables as Frankie Toledo, Hector Lizaragga, Steve Robinson, Botile, Ledwaba, Manuel Medina, Gairy St Clair and Mzonke Fana.

He fought them all and is a true South African boxing legend. 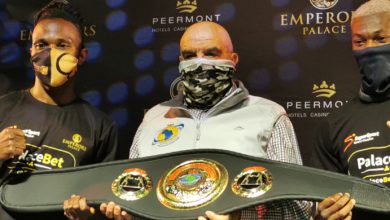