Rodney Berman has dangled a cash carrot to both Thabiso Mchunu and Johnny Muller to square off at Emperors Palace in October.

Spurred by the clash of styles and the undoubted power of both, the Golden Gloves promoter reckons it is a fight loaded with intrigue and explosiveness.

Mchunu has lorded it over SA opposition in recent years, while Muller has been involved in memorable scraps against the likes of Ryno Liebenberg and Kevin Lerena.

“It would be an incredible match-up,” predicted Berman.

He said that Mchunu was a world-class fighter who in 2015 was pulverising Junior Makabu before getting caught late in their elimination bout. Mchunu was also the winner of the Super Eight cruiserweight event, promoted by Golden Gloves in 2012.

Berman was also encouraged by Muller’s performance against unbeaten Micki Nielsen in the Super Four. Although the South African lost a decision, he stood in the trenches and absorbed Nielsen’s best shots. The southpaw Mchunu can crack, but Muller’s durability makes him one of the most entertaining fighters on the circuit.

Mchunu rebounded from the Makabu defeat to outpunch Boniface Kabore in May. He is rated number nine by the WBC. Muller hasn’t fought since losing to Nielsen, but trainer Harold Volbrecht is believed to be keen to mix it with Mchunu.

Mchunu was meant to fight in Durban recently, but the tournament was cancelled, leaving him in limbo.

The possibility exists, too, of the winner of this fight squaring off against the winner of the Super Four (Lerena v Nielsen), but Berman doesn’t want to think too far ahead.

Securing the signatures of Mchunu and Muller is his chief priority. 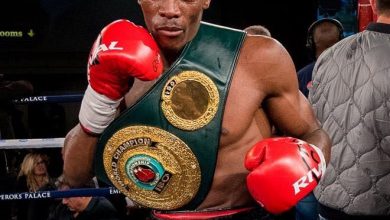