Berman listened and signed him. The rest is history.

Later today, another fresh-faced heavyweight will meet with Berman. Just 19, Keaton Gomes also has great hopes of making the big time, a dream he hopes to realise under Golden Gloves’ guidance.

Gomes, from Durban, has already worked out with trainer Peter Smith, who knows a thing or two about big guys. He was an elite-level cruiserweight himself and his father Kosie fought for the light-heavyweight world championship. Not forgetting that he trains Kevin Lerena too.

“He’s a baby, but has great potential,” said Smith yesterday.

The intention is for Gomes to move up to Joburg full-time ahead of his much-awaited pro debut at Emperors Palace on June 23.

Gomes’ mum, Charmaine, says that her son first boxed at the age of 12 and reeled off 30 straight wins, which included KZN colours and an SA title in the 75-80kg division in 2015.

He started out at the Bluff boxing club and more latterly worked out of his father Grant’s boxing gym, also in Durban. Despite being offered a rugby scholarship, young Gomes opted for boxing, backing his speed and power to make an impact in the pro game.

“I remember the debuts of many of our best, from Gerrie Coetzee and Kallie Knoetze to Johnny du Plooy, Pierre Coetzer and Corrie,” said Berman. “They all started out in the 90kg range and filled out to become proper heavyweights. That’s the plan for Keaton, perhaps the first genuine prospect to emerge in the division locally since Corrie.”

Smith believes Gomes, while raw, has the makings of a formidable fighter. “He’s very strong. I’m not sure he’s a heavyweight just yet – he’s around 93kg – so we’ll start at cruiserweight. He needs time to develop his skills, but I love helping with that stuff. Unlike [my other boxers] Rowan Campbell and Kevin, he has amateur experience, so the bright lights won’t dazzle him. He’s got grit; I’ve seen it in videos of the kid. He reminds me of Kevin with his strength and ability.”

Looking at the path treaded by Sanders, Du Plooy and Coetzer, who all flourished under Golden Gloves, the future is bright for the newest SA heavyweight off the production line. 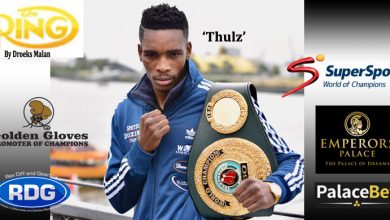