Fans love punchers. When they can back it up with skills and shtick, they move to another level entirely.

Thulani Mbenge is this type of fighter. Recently crowned SA welterweight champion, he demonstrated in his domination of Shaun Ness the ability to dig deep, mix up his game and produce the goods at the right time.

“I’ve little doubt he’s the best South African welterweight out there,” says Rodney Berman, who promotes Mbenge, now 10-0 (10 KOs). “He’s raw, but there’s something very special about him. He has the talent to go all the way.”

Indeed, Mbenge himself was happy with how he fared against Ness – he stopped him in the seventh round – but he had a few reservations when watching the tape. “I felt great, but I saw differently when I watched the tape. I saw a few things I need to fix.” 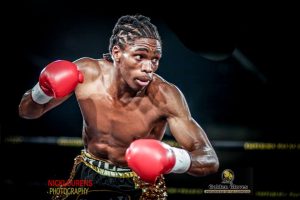 This is an encouraging attitude from the 25-year-old, who clearly still wants to learn. He’s a dedicated trainer who is committed to making a big impact as a pro fighter. He knows he’ll get better by putting in the work.

There’s been talk of enticing veteran Chris van Heerden for a fight that would be huge in a SA context. Mbenge wouldn’t mind, saying he’ll fight allcomers. “I’m very satisfied with the pace of my career and how Rodney Berman is doing things. I will fight who he wants me to fight. I won’t say no to fighting anyone.”

Despite being a relative novice in professional terms, Mbenge has a wealth of amateur action under his belt. Growing up in Mdantsane, he recalls fighting almost every weekend while dominating the amateur game and winning national titles. He estimates he boxed around 200 times in the unpaid ranks, winning the majority with his fast hands and steady, dependable style.

Next month he takes another big step up when he fights WBO number 15 Jay Inson at Emperors Palace. It will put him on the fringes of the top 10 and potentially make the contenders sit up and take notice. It’s a crucial fight and one he intends winning.

Mbenge is just at the start of his career. He knows he has a long road to walk, but he’s paying his dues.

“Being SA champ means the world to me, but it’s just the start,” he vowed.

Enjoy the show. This one’s going to run and run.

Nomeva aims for the stars