If nothing is quite what it seems in boxing, the latest turn of events will confirm this to be true.

Mike Perez has withdrawn from his fight against Thabiso Mchunu in favour of a big-money offer in Europe, a brutal consequence of South Africa’s weak currency.

Determined not to jettison the June show, set for Emperors Palace, promoter Rodney Berman has gone back to Plan A, which has risk written all over it notwithstanding the excellent merits of the match-up: Mchunu versus Tommy Oosthuizen.

Yes, that Oosthuizen, who is currently incarcerated in prison in Boksburg on drugs charges.

The former IBO champion has a bail hearing scheduled for April 23 and, assuming he is released, he will come directly under trainer Harold Volbrecht’s care.

“If he is released, there will be no impediment to him fighting – he’s yet to be convicted of anything,” said Berman, who has another opponent on standby – just in case.

Despite his love-hate relationship with the controversial boxer, Berman believes the greater good will be served by having Oosthuizen on the card. “There are two things to consider. Tommy gets into trouble when he’s not boxing. The sport keeps him on the straight and narrow. At his best, he’s the most naturally talented SA boxer of the past 10 years. The other reality is that this is a very good match-up between two locals.”

Berman has been assured by Volbrecht that he’ll keep the southpaw on a short leash, especially as Oosthuizen is said to be desperate for cash. This fight will thus keep him focused and provide sustenance as he sorts himself out. He will, Berman assured, be drug-tested in the build-up.

Berman admits that the boxer has driven him crazy over the years, what with his weight issues and frequent flirtations with the law, but he remains a drawcard and is a top 10-quality light-heavyweight when he brings his A-game.

“It could all fall apart, of course it could, but I’d like to give him every chance of putting his life back together. He’s young enough and boxing is all he knows. Surely he deserves this?”

Whether the fight comes to fruition or not, the card will include Thulani Mbenge’s IBO title shot against an elite-level welterweight, plus Rowan Campbell’s IBO Youth title fight. 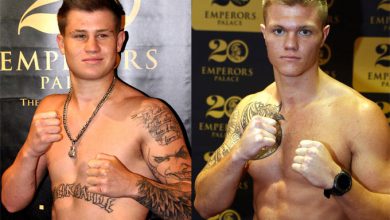 Boxing great weighs in on ‘Supercharged’