In the end, Sunday’s tribute tournament to Mzi Mnguni was perfectly apt: an explosive event brimful with talent and a joyous crowd in full voice.

IBO champion Simpiwe Konkco delivered in emphatic style in the Orient Theatre headliner, dominating the redoubtable Nkosinathi Joyi with the performance of a lifetime. He played the role of master in subduing a formidable challenger, sweeping the cards down the stretch to win comfortably: 116-113, 118-112, 119-111.

The champion will now spend the next few weeks resting up in Mthatha, his family home, and contemplating what fights might come. It wasn’t too long ago that he was on the outer, but since signing up with Golden Gloves and trainer Colin Nathan, his career trajectory has shot up. At his best, he would have a shot against any of the other major title holders. In East London on Sunday, he never looked better as he produced a trip-hammer jab, speed down the middle and shrewd game management.

Mnguni, looking on from the VIP gallery, would surely have approved.

Amid a raucous atmosphere with chanting from first round to last, Konkco fashioned a great fight. He bust up Joyi badly around the eyes and dominated the last six rounds to confirm the decision.

Southpaw Joyi had his moments, not least in the third when the pair rocked each other with bombs, but he had neither the snap nor the sharpness of his opponent. His savvy ring instinct always kept him in the mix, but he never found the range as well as Konkco did and he had to settle for flurries rather than a steady rhythm.

The key to Konkco’s win was his strength and speed. He used the early rounds to wear down the former IBF champion and then teed off with relative ease through the second half of the bout.

Joyi deserves credit for hanging tough with the fierce champion, a man he warmly embraced after the decision was confirmed. Joyi had no complaints, satisfied that the better fighter had prevailed.

“I knew it wouldn’t be a walkover,” said promoter Rodney Berman, who was bowled over by the warmth and good humour offered by a capacity East London crowd. “The show surpassed all my expectations.”

The entertaining Dyer mixed up his punches well and repeatedly hurt the game Bushby with digs to the body. Twice he put him down with body shots in the fourth, repeating the act in the eighth with text book hooks to the liver. The final one signalled the end for the home fighter, who had no answer to his all-out assault.

Not even the presence of legendary ex-champion Vuyani Bungu was enough to inspire Bushby, who fought bravely but just didn’t have the offence to handle Dyer, who can go on to bigger and better things from here. 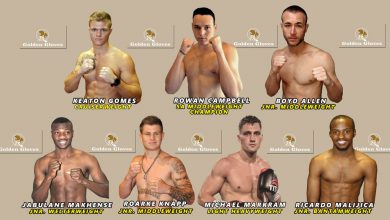 Berman sounds out GGG for SA