People who know Tommy Oosthuizen will tell you there are two “Tommy Guns”.

The first is affable, quick-witted and warm-hearted. The other is morose, unhinged and liable to go off the deep end.

Anyone who wants to see the best of Oosthuizen the fighter will hope for the former.

By his own admission, he’s known dark days. There was jail time, trouble with drugs, fights outside the ring.

If boxing once kicked him out, boxing has brought him back again as he shapes up for arguably the most important fight of his career.

On September 1 he faces crosstown rival Thabiso Mchunu at Emperors Palace. Somehow, Oosthuizen has got his life on the straight and narrow, aware that it all comes down to this fight.

If the 30-year-old loses, he faces banishment from the fight game, perhaps even a spiral into Nowhereville. He’s had umpteen chances. This might be the last.

Aged 30, he’s lost just once, but he’s packed in enough action – in and outside the ring – of a man twice that age.

Yet if he wins, he becomes a viable contender either at cruiserweight or light-heavyweight. He has enough credibility to stake a claim, although he knows the measure will come in how he looks and acts now rather than how he once did.

For now, there’s a fresh sense of calm and self-awareness that suggests that Oosthuizen has grown up, perhaps seen the error of his ways. There’s a baby in the house, and a reckoning that he’s been given a lifeline. He doesn’t want to mess it up.

“I’m done with my shit,” he says with typical candour.

In trainer Harold Volbrecht’s gym in working class Boksburg, Oosthuizen looks both heavy and fast. He’s heavy in the sense that he’s comfortable, but not podgy, around the 90kg mark. Mchunu may be more chiselled, but Oosthuizen is thick and lean. The sometime middleweight won’t be cowed by the physical battle.

Crucially, he’s also moved in with Volbrecht and his wife Michelle. If Volbrecht was once concerned that he’d catch Oosthuizen with the booze bottle, nowadays he worries that Oosthuizen might be raiding the fridge for snacks. It was always thus.

Volbrecht has him on a tight leash and the result is an Oosthuizen who looks slick and dangerous, ready for Mchunu’s southpaw skills.

“After he left me, he became a brawler,” says Volbrecht of Oosthuizen’s departure to trainer Gert Strydom’s camp last year. “I’ve brought him back to what he is, a guy who uses his skill and fights from the outside.”

[perfectpullquote align=”left” bordertop=”false” cite=”” link=”” color=”” class=”” size=””]’That’s what happens when you take a Mercedes to a BMW mechanic. I’m back with the Mercedes’ – ‘Tommy Gun’ on leaving Harold Volbrecht in 2017[/perfectpullquote]

The shift was a mistake and Oosthuizen discovered it the hard way, dropping a decision to Russia’s Igor Mikhalkin in Germany.

“That’s what happens when you take a Mercedes to a BMW mechanic,” he says wryly. “I’m back with the Mercedes.” 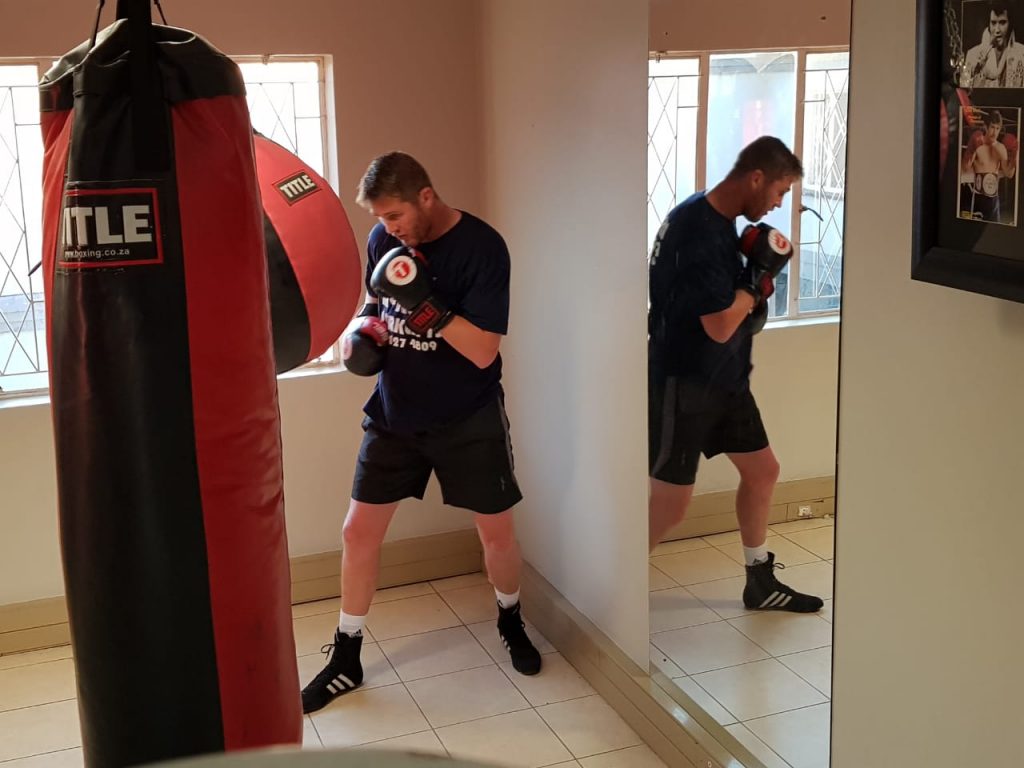 Volbrecht therefore has a near-perfect record with the 27-1-2 fighter and reckons he still has much to offer.

“This fight is all about reach and hand speed. If Tommy keeps his reach, no-one can touch him,” says the venerable trainer.

It’s a fight between southpaw counter-punchers, but Volbrecht insists it will be exciting: “Tommy can keep distance and throw long shots. Mchunu can try and counter-punch, but he’ll miss. He’s going to have to take risks. Thabiso might come in and smoke a bit at the start . . . that’s fine too.”

The man they called “The Hammer” is happy with Oosthuizen’s weight, likening him to the late Corrie Sanders. If Sanders weighed around 104kg, he’d be sluggish. Yet at 101kg he’d be slick and sharp. This is what Volbrecht is hoping for with Oosthuizen, who he wants at the 89-90kg mark. For now, things are on track.

Neither trainer nor fighter is overlooking Mchunu’s threat, chiefly his major weapon which is a ripping left uppercut thrown when he lays back and his opponent moves in.

“I’m happy,” says the earthy trainer. “There’s always something going on when Tommy’s around, but his talent is undeniable. When he wants to be, he’s a very special fighter.”

He’s knuckled down and re-dedicated himself. We’ll soon know if the new-look “Tommy Gun” is for real or if his wild past has finally caught up with him.