Hekkie Budler has spurned the offer of a crack at the IBF title with promoter Rodney Berman saying he wouldn’t fight for “slave wages”.Budler’s management team and Golden Gloves had to weigh up the opportunity against the money on the table, terms they found untenable considering Budler’s status as a multiple world champion.

The IBO light-flyweight champion was offered $10 000 to fight Milan Melindo in the Philippines, a derisory deal given the risks attached, plus his recent purses, which are far superior.

Moreover, were he to win, he would be locked into a two-fight deal with the Fliipino’s management with terms that were equally ordinary. In the first instance, he would have to grant Melindo a rematch for a $15 000 purse. In the second, he would earn $20 000 against an opponent mutually agreed by Melindo’s team and his own.

“It was a great opportunity, but those terms were so disappointing,” said trainer Colin Nathan. “I can’t allow Hekkie to enter into a slave contract.”

Promoter Rodney Berman was equally scornful, saying this was what happens to many fighters who aren’t properly handled.

“I’ve gone on record many times saying we are chasing down big unification fights, but I would be doing Hekkie a great disservice if I agreed to these terms. He’s a high-profile fighter who has earned his status the hard way. It’s hard enough going to Asia to fight . . . we’d only do so if the money made sense.” 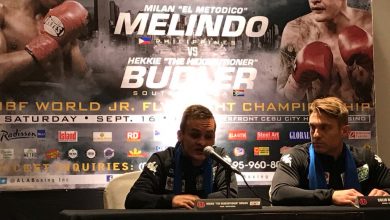