The 24-year-old is on the verge of taking out a pro license, the culmination of boxing for 10 years, mostly out of the well-known Booysens gym.

“I had a great time in the amateurs under [trainer] Nicky Ness; now it’s time to move up,” said the two-time national champion.

Added Nathan: “Ricky’s been coming to the gym for a while. I believe he could become very good.”

However, their hook-up could be brief. Tshabalala is angling to move to the UK – his wife is British – to try his luck in the vibrant fight scene there.

British boxing is on a high and he’s hoping for a crack – provided his spousal visa comes through.

His Whatsapp bio gives some indication of his attitude: “When they ask me how I did it, I’ll tell them. It’s simple . . . I was a kid in a Third world country with a First World Mindset.”

Until then, he’ll continue to pound the boards at HotBox, yearning and dreaming of that first pro bout, which can’t come soon enough. 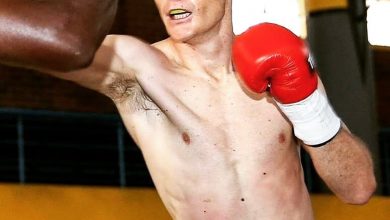 Revenge in the air as rematches dominate

Budler buzzing to be back