All the participants in Saturday’s stacked tournament at Emperor’s Palace have been COVID tested and passed their pre-fight medicals, paving the way for what could well be Golden Gloves’ best offering since the pandemic begun. Soon after the testing and medicals were completed, the news was received that BSA has lifted their Bio-Bubble requirement.
This means that fighters will no longer be required to book into an isolated part of a hotel two days before the fight. They will now weigh-in on Friday as usual and will then self-isolate at home. Crowds are of course still not allowed at the venue and all testing, protective gear and social distancing protocols still apply but the absence of the expensive Bio-Bubble requirement will come as a relief to cash strapped promoters and should give the sport a shot in the arm.
The card will be headlined by Lodumo “9mm” Lamati’s crack at the vacant IBO junior featherweight world title against Jose Martin Estrada Garcia over 12 rounds. Although the IBO, unlike the IBF, does not require their fighters to be within a certain range of the weight limit before the official weigh-in, Lamati was still almost five kilograms outside the junior featherweight limit when he stepped on the scales at the medical.
One can only hope that this is not an ominous sign since the Mexican is known as a brutal body puncher with a hard left hook to the liver and right uppercut.
In the main supporting bout, bragging rights as South Africa’s premier welterweight, as well as the WBA Pan African and ABU titles are at stake when Thulani “Evolution” Mbenge meets the unbeaten Jabulani Makhense over ten rounds.
This fight has all the makings of another local humdinger and has pundits split down the middle, some favoring the punching power and experience of Mbenge, while others are giving the edge to Makhense’s boxing skills.
Junior middleweights, Brandon Thysse and Roarke Knapp, who has both shown great form in their last fights, return in separate eight rounders. Thysse faces his first overseas opponent in Norway’s Tomi Silvennoinen, while Knapp is up against the unbeaten Benoit Makangila Vela from the DRC.
Familiar crowd favorite, Johnny “Hurricane” Muller, will be looking to prove that his last victory over Akani Phuzi was no fluke while Phuzi will be hell bent on reversing his first defeat. The ten-round bout will be for Muller’s WBA Pan African cruiserweight title.
The main tournament will be preceded by a development tournament, featuring some of South Africa’s best prospects in five four rounders and a six rounder.
Fans should note that the tournaments will start an hour earlier due to revised curfew restrictions. The development tournament will be broadcast on Supersport on Saturday from 13:30, with the main tournament directly after that.

Your chance to watch Kucher workout up close 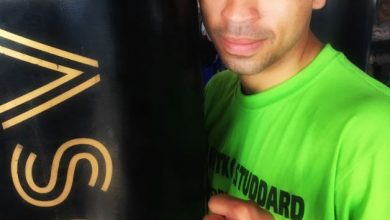 Sensational Studdard moving on up