Roman Belaev will travel from Germany to South Africa next week hoping for better luck, and a better deal, than his last trip produced.

The 25-year-old Russian will fight unbeaten Paul Kamanga on March 19 at Emperors Palace, the very same venue where he lost a 12-round technical decision to Ali Funeka in 2014. It brought him his first loss and left a sour taste.

Belaev is hopeful that this time the judges will be fairer to him. He has watched the video of the fight plenty of times and strongly believes that he didn’t lose.

Speaking from his training camp in Halle, Germany, he still struggles to reconcile that verdict with what occurred in the ring. 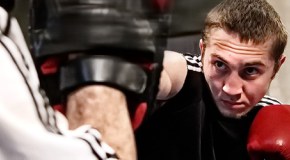 “If the judges thought that every jab Ali Funeka threw actually landed, while I had my left arm up in defence, that’s unbelievable. Those jabs did nothing to me. Ali was very dangerous with his head, for which he should’ve lost points, but this never happened. Ali never hit me so that my legs were shaking, but I landed a few shots that shook him big time.”

Moreover, Belaev believes the judges were generous because Ali was IBO welterweight champion and he was the home fighter.

“If I have a chance to get the message across, I would like to do so,” he said with genuine concern, asking only that he get a fair shake.

Thoughtful and well-spoken, the Russian is concerned about the unstable political situation in the world and worries that he might lose support because of Russia’s international reputation. 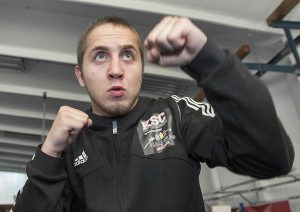 “I want friendship and peace between countries,” he said. “I will carry the Russian flag and hope to be judged by my skills, not by the country I am from.”

Belaev arrived in Germany three weeks ago from his hometown of Kaliningrad, on the Baltic Sea on Russia’s west coast.

He has since enjoyed top-class sparring, chiefly from two-time European champion Magomed Nurudinov, a world champion silver medallist from Belorussia who participated at the Beijing Olympic Games. “He’s given me amazing work,” said Belaev. “My approach has been calm and technical, my preparations are crucial.”

The fighter will bring with him his other great friend and sparring partner, Lelito Lopez, whose father is Mozambican.

“He’s very keen and excited to be coming here and is even hoping he can box here.”

Like many youngsters, Belaev is a football fan who enjoys the company of friends.

He’s looking forward to leaving his mark in South Africa by producing a top performance against Kamanga in a little over a fortnight.

“My performance will be technical and good,” he assured. “It won’t be a fight, but a boxing match. As my trainer says, boxing is a combination of chess and ballet.”

Return to the max as Ryno and Koelling sign for rematch – in SA!