It has the makings of a backyard brawl, but whatever happens when Jade Karam and Cowan Ray fight on September 1, the bout is bound to be memorable.

The fight was made this week, BSA sanctioning it yesterday, boosting the “Call to Glory” show on spring day.

Karam had an unlucky time of it in his recent foray in Ireland, losing several fights, but during his earlier time in SA he enjoyed a good run with his crowd-pleasing style.  Click here.

“He’ll fight his heart out,” said promoter Jeff Ellis, who made the fight and coincidentally grew up in Mayfair, as did Karam. Another link is that Jade’s grandfather was Paul Karam snr, who campaigned in the 1950s and ended his career with a fight against Hottie van Heerden.

Cowan Ray, the son of former national heavyweight contender Basil (who was promoted by Ellis), has a flawless 4-0 record, but needs to get a move on if he is to make a dent in the middleweight rankings. He’s fast and hits hard, making him a good foil against Karam’s greater experience.

The fight card is topped by the mouth-watering clash between Tommy Oosthuizen and Thabiso Mchunu. 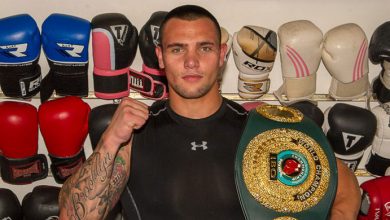