Battered by his opponent and now battered by flu, it hasn’t been the best of weeks for former world champion Hekkie Budler.

Three days after suffering just his second defeat in 10 years, the little fighter was still trying to come to terms with the loss. He’s an excellent strategist, but even he hasn’t been able to work out why he was so demonstrably out of form against Byron Rojas on Saturday.

Nothing Budler tried seemed to come off and even when the fight was in the balance, he failed to go for broke in the manner he usually does. He was soundly beaten and never protested the decision even for a moment.

“I boxed terribly,” he admitted on Tuesday. “I guess you have to have an off night, but I’m heartsore. Nothing worked . . . I don’t know what the problem was, I just couldn’t get into my rhythm.”

He said that speculation that he had struggled to make weight was wide of the mark, adding that he wasn’t against trainer Colin Nathan’s suggestion that a move to light-flyweight could do him the world of good.

“I actually make the weight easily. Colin thinks I’ll be better at light-fly; I’m prepared to give it a go.”

Budler said that Rojas was technically efficient rather than brilliant, but commended him for his strength and power.

Asked if he may have been complacent after having been champion for so long, Budler said he had no idea. His lack of form on the night puzzles him, even now.

“I feel I didn’t pitch up. I felt the same when I fought Gideon Buthelezi [who inflicted his first loss]. But this was really bad, nothing felt right.”

The local hero plans to take a little bit of time out before recalibrating his boxing style with an eye on the light-flyweights. Nathan has already met with Golden Gloves promoter Rodney Berman to discuss the options.

A rematch isn’t on the cards, but a tilt at one of the championships at the higher weight certainly is.

At 27, Budler still has time. One bad night won’t define him – just as long as he gets back his mojo. 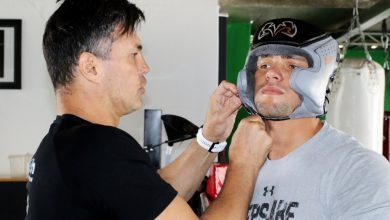 Lerena has his headgear strapped on