If the rematch between Kevin Lerena and Johnny Muller has drawn most of the attention, the undercard of Sunday’s Golden Gloves/African Ring tournament at Emperors Palace is bursting with dynamic new talent.

Promoter Jeff Ellis has the rare gift of delivering what the fans want and he hasn’t disappointed.

Some fighters, like DeeJay Kriel and Joshua Studdard, are well known among local fans, but there are some hidden gems, too, like Lucky Mongebane and Stirling Shaw.

“There’s no secret,” explained Ellis. “Fans want thrills and you get this by securing good match-ups. That’s all we’ve done.”

Kriel will be going for his ninth win in 10 fights when he meets Ayanda Dulani in a mini-flyweight six-rounder. Kriel is every inch the archetypal gym rat and is happiest when he is throwing punches, whether in the gym or in the big hall at Emperors.

Studdard will also seek to continue his march on the upward curve. Unbeaten in six outings, he steps up to six rounds against Sihle Jelwana; a fight promoter Rodney Berman will keep a particular eye on.

“The kid has created a real buzz and it’s not hard to see why. There aren’t many big-hitting junior-bantams around, so he’s worth watching.”

Arguably the most support on Sunday will be for lightweight prospect Lucky Mongebane, who brings with him a vocal fan base all the way from Hammanskraal. They whip themselves into a frenzy before he fights, creating a wonderful atmosphere.

The action will also be broadcast live on SuperSport.

It’s Bombs Away for June 23 action 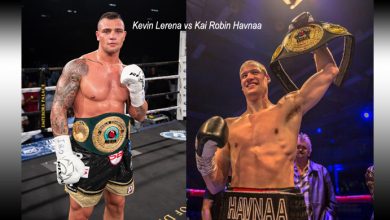 Lerena vs. Havnaa is Close