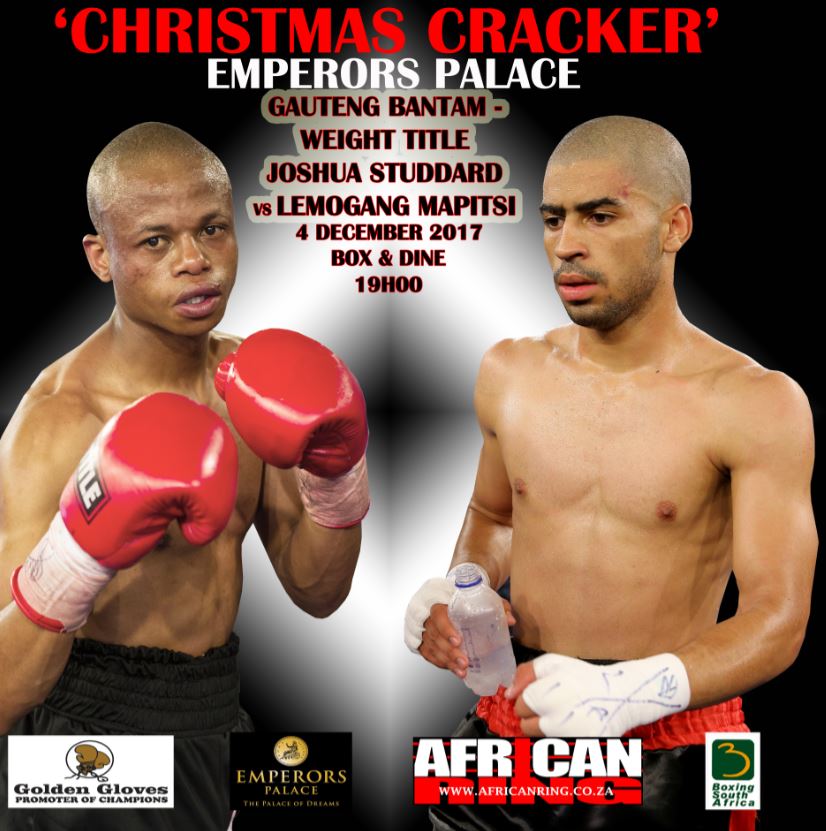 Jeff Ellis’ forté is going back to the future.

With an eye on the best young talent around, he’s again come up with a fabulous “Christmas Cracker” tournament with the next event scheduled for Emperors Palace on December 4 (7.30pm).

As ever, the emphasis is on new blood, although experienced Johnny Muller will also make a turn in a cruiserweight 10-rounder against the DRC’s Youssef Mwanza, who works out under Manny Fernandes and recently shocked unbeaten George Tshimanga.

The headliner, though, is a scrap for the Gauteng bantamweight title between Joshua Studdard and Lebogang Mapitsi. Studdard has had a rough past 12 months, having to deal with the death of his father and uncertainty over his best weight class, but reports out of his gym are encouraging. Studdard is desperate to get the show back on the road.

Unbeaten Rowan Campbell looks to have found his right division, meanwhile, having his second outing at super-middleweight against Bongani Mlotshwa.

There’s an especially exciting cruiserweight match-up with undefeated Josh Roos against promising Chris Thompson, who is coming off a barn-burner against Akani Phuzi, which he narrowly lost.

Fans should also keep an eye on Michael Markham, a light-heavyweight up against Mike McLeod. Markham was SA amateur champion in 2016 and also represented Canada during his sojourn there while living with his mother. Now he’s back in SA and looking to make his mark on the division.

“We’ve been doing these for a few years now and the fans always love to come out,” said Ellis. “The thing that drives these match-ups is the prospect of a great fight. I reckon there are some crackers right here.”

Double hit as Campbell marches on

Top prize in the offing for Orient fan