Rodney Berman admits that the tournaments featuring prospects aren’t for everyone, not least those looking to catch the big names in action.

But if you want honest-to-goodness action between determined youngsters, there will be no better stop than Emperors Palace on Sunday afternoon. It’s the third such “Prospects at the Palace” event and it looks to deliver much the same in energy and excitement as the two that preceded it.

SA welterweight champion Shaun Ness, who heads the bill, has been hidden from view in his pro career, but on Sunday he will take the stage in the main event against Ayanda Mthembu.

It’s no less than he deserves and he is planning to make a statement to ensure that he gets the thumbs up from both Golden Gloves and the fans in attendance.

There’s a potential fight for him down the line against former amateur star Thulani Mbenge, who fights unbeaten Zenzile Mtanze on the undercard. It’s early days, but Mbenge looks like the real deal with flashing fast hands and a real confidence about him.

Popular house fighter DeeJay Kriel meets Nyelesani Thagambega in a catchweight eight-rounder that could catch alight if Kriel presses the action, as he usually does.

Popular Lucky Mongebane is 1-1 as a pro, but he will be under pressure to return to winning ways against Caiphus Thomas in a junior-lightweight four-rounder.

At light-heavyweight, Chaz Wasserman and Fiston Kabamba will hope to settle things once and for all after their recent draw. There is little separating the two and the early betting of both throwing early bombs seems a fair assessment. 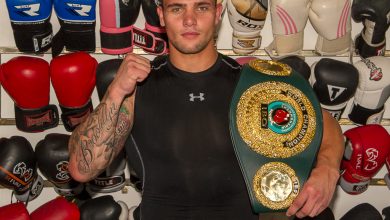