With a compelling headliner – IBO minimumweight champion Simpiwe Konkco against Nkosinathi Joyi – and a high-quality undercard, it is apt homage to a giant of local boxing.

All the action from the Orient Theatre, East London’s famous boxing cathedral, will be broadcast live on SS 7 from 2pm. In a first for boxing on SuperSport, there will be dual commentary in both English and isiXhosa (Alfred Mzizi and Welcome Ncita).

As a manager and trainer, Mnguni produced multiple world and South African champions, among them Vuyani Bungu, Ncita, Zolani Petelo and Mbulelo Botile.

Joyi was one of his pupils, too, and the former IBF champion will be desperate to put on a show for the ageing patriarch who is wheelchair-bound after a devastating car accident.

The Mdantsane fighter, now in his dotage, is a natural puncher who will be looking to claim local bragging rights: Konkco is from Mthatha and enjoys solid support throughout the Eastern Cape.

The champion respectfully refers to Joyi as “Mabhere” – The Bear – on account of dominating the division during his prime five years ago. But that respect doesn’t extend to doing him any favours in the ring on Sunday.

“He’s a big name, but he’s there to be beaten,” says Konkco, who recently relocated to Johannesburg where his career has since taken off. “It’s an honour to be on this fight card when anyone else could have been chosen.”

Konkco is the form man. Last year he gave top-rated Hekkie Budler a furious challenge and more recently he saw off the claims of Siyabonga Siyo with a one-sided beatdown that confirmed his class.

Five years ago Joyi was considered the best fighter at the weight, but back-to-back defeats to Rey Lereto stalled his momentum. He has, however, rebounded with two wins against local opposition and plans to use this opportunity to relaunch his ambitions.

An All-Africa super-middleweight fight between Lee Dyer and Giovanni Bushby, another Mnguni protégé, tops the undercard. In other action, Lwandiso Zinto and Aphiwe Masengwana will contest the Eastern Cape featherweight title, plus there will be an eight-round strawweight bout between Ayanda Dulani and Xolisa Magusna and a four-round junior-bantamweight contest between Sipnamondla Mkhambaphi and Andile Nxayiphi. 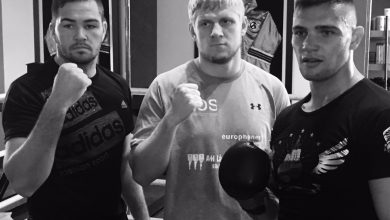 The countdown to ‘Night of Reckoning’ has begun!