Peter “Terror” Mathebula may have passed away in January this year at the age of 67, but his place in South African boxing history as our first black world champion will endure.

Mathebula became South African flyweight champion when he beat Johannes Sithebe on points in 1978. The following year he also knocked out Leslie Pikoli for the national bantamweight crown, holding both titles simultaneously. He campaigned in both divisions, making a successful defense of each title, but when Welile Nkosinkulu stopped him in nine rounds for the bantamweight title, he went back down to flyweight.

After two more defenses of his South African flyweight title, he got the opportunity to challenge the WBA world champion, Taeshik Kim of South Korea, at the Olympic Auditorium in Los Angeles in 1980. The city had a large population of Korean immigrants who came out to support the champion, making it hostile territory for Mathebula but he was unfazed by the occasion.

Although he was a big underdog with little international experience, Mathebula surprised everybody. Kim pushed hard but Mathebula out boxed the brawling champion behind an accurate jab, despite having his left eye closed by head butts early in the fight. When Kim did trap him on the ropes, he cleverly bobbed and weaved himself out of trouble, every so often flurrying with combinations to the body to stop Kim’s forward march.

After fifteen rounds, one judge scored the fight for Kim but was overruled by the other two judges who both had Mathebula winning by identical scores of 145-143, declaring the South African a winner by split decision.

Mathebula, who left with little fanfare, returned to a hero’s welcome and instant celebrity status, which would later prove to be his undoing.

The hunger gone, he could not duplicate the performance he gave against Kim and lost his title in his first defense to Santos Laciar of Argentina who stopped him in seven rounds at Orlando Stadium.

Still, in retrospect, Laciar was better than originally thought, which should take some sting out of the defeat. He too lost the title in his first defense but regained it and made nine successful defenses before moving up to the super flyweight division where he captured the WBC world title.

Mathebula fought on, winning some local fights but losing on the international scene. He retired on a high note in 1983 after stopping Jacob Molefe for the Transvaal bantamweight title. 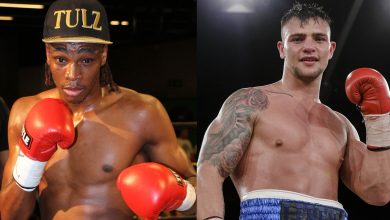