Even now, two days after seeing Hekkie Budler royally stiffed in the Philippines, promoter Rodney Berman is furious with the IBF.

Budler dropped a split decision to Milan Melindo in a fight pock-marked with suspect officiating, the most blatant of which was referee Wes Melton allowing Melindo’s corner to patch him up after the start of some rounds.

“This is one of the biggest disgraces I’ve witnessed,” said Berman. “I can’t stand this crap – the IBF should be ashamed.”

Berman says he won’t lodge a formal objection, having no interest in working with the IBF.

He has, however, let IBF president Daryl Peoples know in no uncertain terms what he thinks of its performance, penning a strongly-worded letter:

“I just witnessed one of the biggest disgraces I have seen in boxing. Twice, not once, Melindo was treated in his own corner after the start of the round . . . ice packs put on his neck and the cuts dressed. He had to go to a neutral corner.

“To make sure Melindo got the decision the ref ruled an obvious slip a knockdown. AND the judge giving Melindo victory by 6 rounds. Under normal circumstances I would lodge an objection, but I have lost all confidence in the IBF – a blatant robbery!!!”

Berman has already petitioned the WBC to look favourably upon Budler given his excellence as a fighter. For years he has sought unification bouts for the IBO champion. He is hoping the organisation will give him a top 10 ranking, perhaps even a crack at the Silver belt, which is vacant.

He confirmed there would be no rematch with Melindo. “It’s the first and last time we go to the Philippines for boxing. The IBF has seen to that.”

There was no shame whatsoever in Budler’s performance. He showed he still has what it takes at this level, but there’s no accounting for the damage wrought by the incompetence of others. 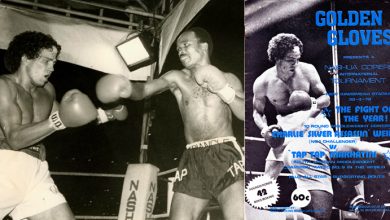