Lehlohonolo Ledwaba, nicknamed “Hands of Stone” after the legendary Roberto Duran, needed every bit of greatness within him when he took on the former WBA bantamweight world champion, John Michael Johnson, at the Carousel Casino for the IBF world junior featherweight title vacated by the great Vuyani Bungu.

Johnson had won the WBA title in 1994 by stopping the undefeated Junior Jones in eleven rounds in a huge upset. He would lose the belt in his first title defense in Thailand, but he rebounded nicely and rode an eight-fight winning streak into the Ledwaba fight.

Ledwaba for his part, had won everything there is to win except a major world title. He had won the South African title at junior featherweight, as well as the lesser regarded WBU world title in a drop down to bantamweight against future WBO world bantamweight champion, Cruz Carbajal.

The South African fans badly wanted Bungu’s old title to stay in South Africa and Ledwaba obliged them in fine style but not before having to overcome some difficulty against the rough and tumble fighter from San Antonio, Texas. The unorthodox pressure fighting of Johnson seemed to bother Ledwaba in the early rounds and in between rounds he complained to his corner that his protective wrap around cup was affecting his breathing. After they loosened it, he started hitting his stride, using his superior hand speed and more polished skills to outbox the Texan, while also mixing in his trademark hooks to the body. Ledwaba prevailed by two scores of 116-112 and a third card of 115-113 to become South Africa’s second IBF junior featherweight world champion.

Ledwaba was very impressive as champion, making five successful defenses with only one of his opponents hearing the final bell.

He was then given the chance to showcase his skills on a big stage, defending his title on an HBO pay-per-view as the main supporting bout to Oscar de La Hoya’s fight against Javier Castillejo at the MGM Grand in Las Vegas. He was matched against a little-known former WBC flyweight champion from the Philippines named Manny Pacquiao. Ledwaba was overwhelmed and stopped in six rounds. The rest as they say is history. No shame in losing to “Pacman” who went in to become a all-time great of the sport.

He fought on until eye trouble forced him to retire in 2006, winning some and losing others, giving Cassius Baloyi two very hard fights where many considered him unlucky not to get the nod in their first encounter.

At his best, Lehlohonolo Ledwaba, his first name meaning “luck” in Sepedi, was a marvel to watch.  No less an authority than Brian Mitchell called him “South Africa’s best body puncher of all time.” 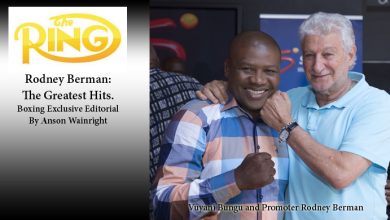