An array of top fighters stepped into the light at SuperSport on Thursday afternoon for the launch of “Southpaw Showdown”, taking place at Emperors Palace on October 22.

It was a Who’s Who of SA boxing as the like of Welcome Ncita, Dingaan Thobela, Brian Mitchell, Sebastiaan Rothmann, Harold Volbrecht and Pierre Coetzer mingled with modern-day fighters like Simphiwe Konkco, Hekkie Budler and Kevin Lerena.

The action was hot and heavy as the fighters took turns sparring, skipping and working out before an appreciative crowd of onlookers from the media and MultiChoice, who marvelled at their skills.

Strawweight sensation DeeJay Kriel put on an impressive demonstration with the skipping rope while his opponent in October, Nyelisani Thagambege, engaged in light sparring.

“It’s fantastic to get a sense of the hype around the event,” enthused promoter Rodney Berman. “We’re still eight weeks out, but the intensity is building. The boxers are all dead keen.”

Lerena looked especially sharp as he worked on the pads with trainer Peter Smith. He was fast and agile and light on his feet; factors that could be decisive in his “Super Four” decider against Micki Nielsen. 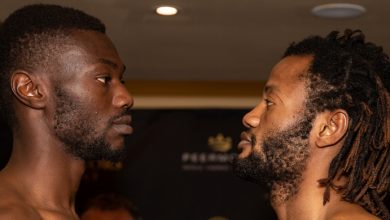