Like the old Chinese curse, we certainly live in interesting times. The only certainty seems to be uncertainty itself and the pandemic has affected the fight game with endless stops and starts.
Boxing South Africa has completed their inspection of gyms country-wide, but the sport is still waiting for the go ahead from government to start training, even when other contact sports can. The nature of the virus is also dynamic. Just when it seems that the infection rates are under control, a new spike pops up somewhere and what seemed feasible yesterday, suddenly becomes risky.
This wreaks havoc with the planning of tournaments, as well as the preparation of fighters. “A guy like Rowan Campbell was preparing for a world title fight overseas, then that was called off. Then we made the Liebenberg fight but now there is also uncertainty when that is going to be,” laments promoter, Rodney Berman.
Nobody wants to die or endanger the lives of others, but the fact remains that everyone needs to earn an income to survive. In that regard, the pandemic has been devastating. “Young prospects like Ricardo Malajika and Jabulani Makhense need the income from fighting regularly. Ideally, up-and-coming fighters should also have a day job, but that is not always the case. Many of these youngsters have nothing else,” adds Berman. With companies closing and job losses increasing, just finding another vocation is easier said than done. Besides that, it will also be heart breaking to see emerging talent drifting away from the sport.
Then there are the veterans like 36-year-old Ryno Liebenberg who must be hearing the clock ticking. His fight with Rowan Campbell represents not only a great send-off, should it be his last fight. Alternatively, it could also be a Cinderella story of note should he win, perhaps propelling him to yet another international opportunity. Whatever the outcome, waiting around is not something “The Lion” would like to do at this stage of his career.
Despite the pandemic, which seems to churn out endless “Catch 22” scenarios with none of the win-win variety, Golden Gloves remain determined to forge ahead with their planned tournaments featuring the final and third place bout of the 4@War junior middleweight tournament, the four man cruiserweight tournament, top prospects Ricardo Malajika and Jabulani Makhense and the hotly anticipated Campbell-Liebenberg showdown.
It is a question of “when,” rather than “if.” “September is looking less and less likely at the moment but failing that, we will have the bouts over four days instead of three in the beginning of December,” explains Berman.
The bottom line: Fighters are hungry. One may argue that sports are not “essential” activities but for the professionals that depend on it for a living, earning an income certainly is essential if they are to eat.
Let us hope that spring will bring warmer weather, enabling the hurt game to blossom again.

Hot prospect lined up for April 23

Heavy-hitting Gomes on fast train to the top 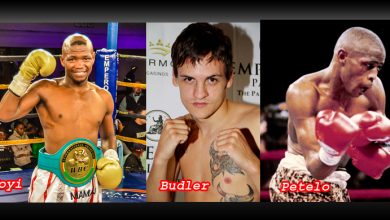