In a fight that might well be called “Unfinished Business”, DeeJay Kriel and Nyelisani Thagambega will square off for a return match at Emperors Palace in October.

Last month the two had a hammer-and-tongs contest that was controversially called off in Kriel’s favour in the seventh round. What had transpired up to that point had been fascinating. Kriel (9-1-1) had boxed well enough, but Thagambega (8-5) had sent him twice to the canvas and appeared on his way to an unlikely points win.

But in a haphazard few seconds in the seventh round, Thagambega spun around with his back to Kriel, despite not being in any apparent trouble. Referee Simon Mokadi then waved it off in Kriel’s favour, leading Harold Volbrecht, Thagambega’s trainer, to rail against the seeming injustice. He was furious.

To his credit, Colin Nathan, Kriel’s cornerman, agreed that the ending had been unsatisfactory and he was happy to settle the issue with a rematch.

“Kriel won the fight fair and square and had it not ended early, I’m convinced he had done enough to win on points,” he said. “But I can see why some argue the other way. We say ‘bring it on’ – we’ll settle things once and for all on October 22.”

The fight is a solid addition to an already quality bill that has been stacked with the likes of Hekkie Budler, Siyabonga Siyo, Chris van Heerden and Kevin Lerena. 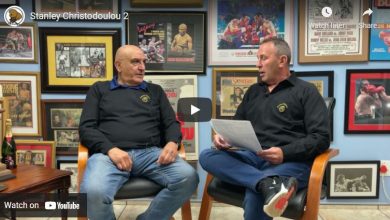